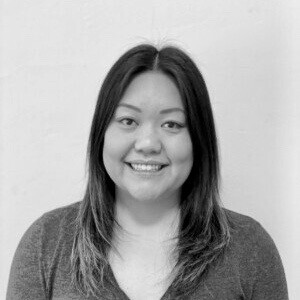 Joanne Lee-Yuen is a lead teacher at Wu Yee Head Start in San Francisco, California.  Joanne spoke with Casey Federico about growing up in a family of educators and her approach to tinkering and making in the classroom.

I was born and raised in Oakland. When I was in preschool, my Mom was studying to be a teacher. She took those classes where you bring your child to school, and you learn, and the children are there – and so I was there all along!

I knew I wanted to become an educator since I was in preschool. As a child, I started off with pretend play with my dolls, siblings, and cousins. Then, I worked in a preschool during high school as part of Oakland’s Youth Employment Program, and then volunteered in elementary schools in college. After college I began working at the same preschool where my Mom worked, and then moved to Wu Yee.

Wu Yee Generations is a one classroom site with 20 children and three teachers. Most of my students are Cantonese speaking and their parents are immigrants to San Francisco. Before I got the job, I didn’t know I would use my Cantonese, but I am so glad I can. I’m happy that I know how to speak Cantonese, because what kind of role model am I in a classroom of dual language learners if I am not practicing Cantonese when I’m also Chinese? 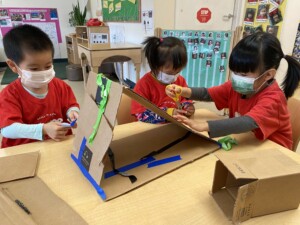 A lot of the experiences that the kids are living right now is how I grew up. When I’m doing parent-teacher conferences, I can share with families my upbringing, take them to where I was, which is what their children are living and doing. A lot of the parents have just recently immigrated here, like my mom. There are similarities with the culture and with learning, the parents want their children to do certain things, like writing and ABCs. I tell them, that’s what I grew up with, like my mom would do and say the same things as you, and you know what? It didn’t work for me. I’m trying to explain all these open-ended projects to families, trying to get them to extend their child’s interests and follow their lead, and it becomes very persuasive when I bring in my own examples.

My grandma was also a teacher in China, my mom's mom. Sometimes, we talked about it. She would say, “you only have to take care of 12 kids here! I had to take care of fifty by myself.” And I'm just like, “oh, yeah, Grandma, the regulations have changed.”
Joanne Lee-Yuen

Can you tell me about a time that your students used an unexpected material or made something surprising? 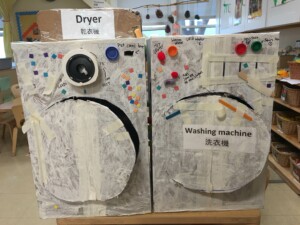 A few years ago we were doing a clothes study and the kids wanted to make a washing machine. We used a box, we painted it, and we were putting buttons on it. And then one day an Amazon package came and I asked one of the kids to help me throw away the empty spool after I unraveled the string. A student grabbed onto the spool, and she asked me, “can we use this for the washing machine?” I said, “sure, what can we use it for?” and she went up to the washing machine we had made, and said, “This is where you turn it to make it hot and cold.” That washing machine was amazing, so many things you would never have thought of. They added so many buttons and they told me that one of the buttons made your clothes sparkle!

I want a washing machine like that! Along with the use of unusual materials in tinkering, we often use new tools. How do you introduce tools to children? 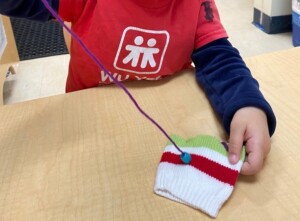 In the same clothes study, I wanted to share sewing with the children, but everyone was very worried about using needles. So I found burlap and these very dull, plastic needles. And I needed to check in with my manager and other teachers, because people get nervous about safety and needles. But we got the OK on using plastic sewing needles and the kids made so many things! They were sewing buttons onto the burlap. And then some of them were making purses. It was amazing what they could do with that new tool and skill!

Tell me about your process of documentation. I know that is such a strength of yours, and you create beautiful documentation to share.

At first my coach, Donna, came into our class, and she was taking pictures, and she made something simple with images of kids and descriptions of what they were doing. We posted it up and the parents were like, “Whoa, that is so cool.” And I saw how the kids engaged with it, like, “whoa, that’s me!” After that, I started making short stories, then we started doing studies, because I was also in the process of learning about project work.

I make this documentation for me, my kids, the parents, and the administrators. For myself, I do it to allow myself time for teacher-reflections. While I’m putting it together, I analyze and summarize what we did. I get to take a step back to figure out what happened during that moment and what I need to do next. You know, sometimes, things happen so fast in the classroom and I’m just taking pictures. But when you really sit down to look at the photos and pay attention to what the child is doing, it helps you dive deeper into the child’s interest and thinking. It helps me retain my memory of what that child really accomplished, rather than it’s just another moment that happened. Looking at my own documentation also motivates me to keep going. I can’t wait to see what else we’ll do together. 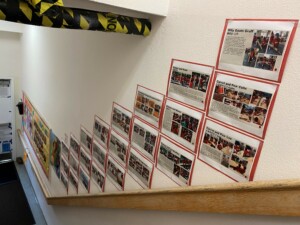 For my kids, they spend so much time on their work, I just want it to be somewhere. I want them to see their hard work. I bind one up to leave in the li

brary area for them to look at whenever they want. I also stick it in the classroom or in the hallway. It’s pretty fun. They tell their parents, “look, that’s me!” I try my best to include all their photos and a short story with everyone’s names so everybody gets to be a part of it. When they see themselves or hear their names being read, they perk up, they’re engaged, and I can tell they feel good and want to do more.

When you were growing up, in your family, what did you see people making or fixing? As a kid, did you get to be part of that?

I was with my Mom a lot, so my Mom would cook, and I’d always stay with her. That’s why I know how to do a lot of traditional (Chinese) cooking. Sometimes my co-workers, who grew up in China, ask, “How do you know how to make that? I don’t even know how to make that.” And I tell them I grew up helping my mom. Like when she made the 粽子, which is a leaf wrap where you have to wrap it a certain way to put fillings and rice inside. It’s kind of like a Chinese tamale! Honestly, making it is kind of like an art. When I was a kid, I would watch my mom make 粽子. I would just grab the leaf and try to imitate how she folds and hold the leaf. Then, she would tell me what I need to add, what she does, and I’d follow her. She gave me compliments even as I dropped rice all over the floor. It encouraged me to try again. And then, after a while, I told her, “Hey, Mom, you don’t need to do it anymore because I actually like doing it.” While she was doing it for, like the culture and holidays and because she had to, I did it because it was fun. It was like an art to me.

As adults, we do things because we have to, but as kids when we see parents and adults do things, you want to be a part of it, right? You want to do it. And so when you’re actually doing it, you’re just like, it’s so fun. That was me cooking with my Mom.

A few months ago, a grandmother in my program told me that her granddaughter was playing teacher at home, setting out her dolls and saying she was Miss Joanne. I told the child, “you could be the teacher here, too!” It’s so fun because I used to do that!